At the beginning of December, our seven-year-old wasted no time or words in making Santa aware of his desires. (“Dear Santa, I want . . .”)

He pestered me to help him mail it right away, but first we had a talk about “niceties” and a subsequent revision. The second letter, complete with falling snow, turned out a little better with the help of a ‘please’ and a ‘thanks’: 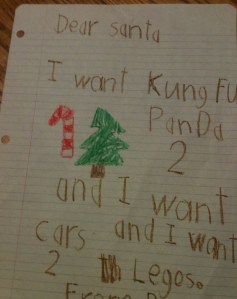 Then this week I discovered I had a bigger job in the Teaching Etiquette department than I’d originally thought.

Two neighbor girls who are good friends with our boys came to our door to bring them gifts. Afterward the seven-year-old started musing about who else might bring him unexpected gifts. He began listing the likely candidates: “Well, I know I’ll get presents from Grandma and Grandpa . . .”

I stopped him. “It’s not very good to focus on what you’re going to get.”

“But I said ‘thank you’ when they brought the presents!”

A plan began hatching in my brain as I replied, “Yes, you’re really good at ‘please’ and ‘thank you’ now, so it’s time to bump it up to the next level. Now it’s time to think about what gifts to give to people. Who would you like to give presents to for Christmas?”

He listed his closest friends.

“Okay,” I said, my idea still only half-formed. “Get your shoes on. We’re going to the craft store so we can get stuff to make presents.”

“Make presents?” he asked in disbelief. “But we can’t make toys!”

Hour 1: Both the seven-year-old and the four-year-old had a great time selecting and cutting out pictures to glue onto the blocks. Soon we had plenty and they chose six pictures for each set. The fifteen-month-old made things difficult, but otherwise it was so-far-so-good.

Hour 2: The toddler went down for a nap and I got us into assembly line mode. We were slicing the pictures into twelve squares, gluing them, and testing the difficulty level. All was well, but the number of unfinished squares began to overwhelm us. Suddenly my idea didn’t seem so hot as our enthusiasm waned and the whining ensued.

Hour 3: I was left to soldier on alone, grumbling internally (okay, and a bit out loud) about how I was never going to do this again and it would have been so much better to just buy gifts they could wrap and hand to friends.

Hour 4: The four-year-old casually returned, saying, “Hey, I want to glue those on,” as if he’d just realized I was doing something cool without him. Soon the seven-year-old wanted back in on it too. “This is fun!” they declared as we completed some of the sets and they got to play Quality Control, testing the puzzles for age appropriateness and enjoyment level. “We’re like Santa’s elves, making the presents!”

And, as often happens with these parenting lessons, I found myself looking in the mirror and seeing my own hypocrisy.

I’d been doing the same as my seven-year-old, just with time rather than presents, greedily counting up the possible hours I could find to get stuff done this busy time of year. Those four hours crafting with my kids (well, minus the hour when they deserted me) were some of the first hours I’ve spent with them all month. I’m home with them all day, and yet how often do I give them my full attention and actually sit down to do something with them?

Today they’ve been playing with the puzzles again (we’ll have to create “kid-tested, mother-approved” labels for these gifts), which makes me hopeful they will be well appreciated by the recipients.At first I was afraid it would all be wasted effort if their friends don’t like the puzzles, but now I don’t think so, any more than it was a waste to revise a letter to Santa.

Both mom and kids received a good lesson and good feelings just from the giving.

Anybody else going homemade this year and have similar adventures with it? Do you think homemade gifts are worth the time and stress? What do you do to help your kids put giving ahead of receiving? (Bonus points to anyone who can name the picture book that alligator illustration is from!)