I’m sure I’m not the only one who grew up with not only animated Disney movies but the old live action ones. We probably watched Swiss Family Robinson a million times, and I mourned when Disneyland switched their treehouse to be Tarzan’s instead because I had always wanted to live in that house with the organ and the ceiling that opens above the master bed.

The other live action one I used to watch most often was Pollyanna.

Looking back, it’s harder to pinpoint why that one appealed to me so much. She didn’t get to live on an island with all those animals as pets and build a super cool treehouse to live in (not just play in). But I loved it, and I find that it’s one of those childhood movies I still think about as an adult.

In case you haven’t seen it, probably the most famous thing about Pollyanna is the story she tells about the origin of “The Glad Game.” She’d been hoping for a doll for Christmas, but there was some mix-up and in the missionary barrel she found a pair of crutches instead. To make her feel better, her dad invented the game, saying, “Well, let’s be glad we don’t have to use them!” It became their method of dealing with disappointments: finding a reason to be glad about them.

Funny how much a simple story like that can influence you for life, isn’t it? Stories are so powerful.

Lately I haven’t been able to work on mine — on the novel that is so close I’d hoped to send it off any week now. But the baby, now seven weeks old, is so fussy that it’s all I can do to keep up with teaching and my other kids and stay sane. Writing has had to be shelved for now.

But I think about how famous writers have said that if your life were easy, you wouldn’t have anything to write about, so as a writer you should always be thankful for the rough patches.

Today I thought about how I’m glad I have a fussy baby because it’s finally forcing me to learn about nutrition. I’ve never eaten junk food and such, but I’ve never been so good about vegetables and fruits and whole grains and lean proteins and such as I suddenly am. And as I learn about nutrition, I’ve been learning about medicine and so many other cool health-related things.

For example, here’s the random trivia of the day: the term “blue bloods” comes from during the plague, when wealthy people drank from silver cups and so the silver would get in their bloodstream and make them look slightly blue. Everyone thought they survived the plague simply by being wealthy, but really it was because silver is a natural antibiotic.

Isn’t that awesome? As a writer, I eat this stuff up. I love to learn about all kinds of different things because you never know how you might be able to use it in a story.

So, even though I’m barely getting in one blog post a week, barely getting any sleep, barely maintaining my sanity, and not able to work on my novel at all, Pollyanna has affected me for life. I can’t help it. I’m glad for all the current chaos of my life; it’ll give me something to write about down the road.

What disappointments are you glad about? What stories from childhood have affected you for life?

It takes a particular kind of bizarreness to be both an optimist and pessimistic about your own optimism, but my brand of oddity comes from being habitually over-analytical, so what can I say? I know I’m weird. But here’s my recent epiphany.

Thanksgiving weekend we flew down to Arizona to visit both sides of the family: Dave’s brother and his wife, and my parents. And amazingly, everything went so well. The dinner plans originally overlapped, but a late flight ended up pushing one Thanksgiving feast back so that Dave and I could be at both. Then I happened to get to the second half of my sister’s soccer game because it happened to be on the west side of town, we happened to miss a deadly dust storm on the interstate because some premonition told me not to leave when I’d planned to, both department heads I wanted to meet at ASU happened to be in their offices when I got there — stuff like that.

It was a serendipitous weekend, and it made me realize that my life often works like that, and that I’ve almost come to expect it to. Somehow, everything just seems to work out for the best. 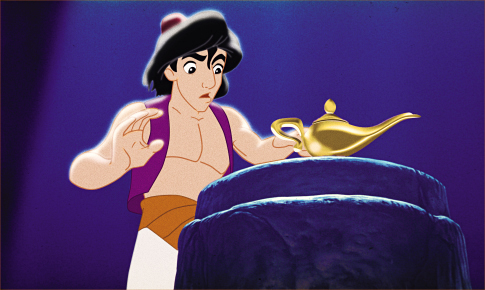 Also while in Arizona, our boys happened to watch Aladdin. It’s one of the few Disney movies we don’t own, so I haven’t seen it in ages, and one scene in Aladdin made me realize the problem with my optimism:

Everything is going swimmingly for Aladdin in the cave. They’ve met a magic carpet (by the way, how cool is the characterization when a carpet can be so expressive without a face or a voice?); Aladdin has spotted the lamp and is climbing up to grab it. And Abu ruins everything by touching the forbidden treasure.

Except if he hadn’t touched it, everything would be different — and possibly boring.

(Notice the Quote of the Moment from J. M. Barrie, too.)

As this dawned on me, I realized that no wonder I have such trouble creating suspense in my novel. I’m handicapped by an overly positive worldview!

In my life, things go right more often than they go wrong, and I’m unaccustomed to thinking in terms of how big a mess everything can fall into. No wonder my first draft of Wendy and the Lost Boys seemed so laissez-faire. I let a few things go wrong, but I didn’t interfere nearly enough. I need to be dropping anvils and pianos on my characters; instead my curse for serendipity continually suggests more pleasant alternatives.

Yet I remain optimistic that I can figure this out. (It’s that paradox again: optimistic pessimism!) I can tangle up my plot lines. I can throw some wrenches in there. I can amp up the danger level. It’s just going to take a lot of imagination, as opposed to drawing from life experience.

A dumb thing to complain about, I know — complaining that my life is too good. But I can fall back on my perspective for happy endings, at least!

What about you? What’s your worldview, and do you ever find it gumming up the works?