I’m sure lots of people are like this, but I go through reading spurts and slumps — even if I give off the impression that I don’t. If you’ve noticed my book count on the sidebar (11 so far since Jan 1st; 3 last week alone) or you get my Goodreads updates, it might seem like I’m going to surpass my 50-book goal way before the end of the year.

Really I’m just giving myself leeway for the months I know I’ll be slacking.

For example, next month I’m going to be reading roughly six manuscripts from other writers. Since they’re novel-length manuscripts, I doubt I’ll be fitting in much other reading. (Except of course Megan Whalen Turner’s Conspiracy of Kings, which comes out March 23rd; I will be reading that book the moment I get it in my hands.)

In the summer, my reasons for slacking are far less legitimate, though. I feel like quoting that line from Bingley in the 2005 film version of Pride and Prejudice when Lizzy asks him about the library at Netherfield: “Fills me with guilt. Prefer being out of doors. Not that you can’t read out of doors, of course.”

And Jane answers, “I wish I read more, but there always seems to be so many other things to do.”

Sometimes I bring books with me outside, but often I just want to enjoy the sunshine. Or water my plants. Or watch the plants grow. (Not even kidding.)

So fear not: my current overdose on novels is me storing up for the sunny months ahead. I’ll still be lucky to hit 50 by the end of the year, as per my new year’s resolutions.

What are your reading habits like? Are you consistent throughout the year or do you find yourself more likely to curl up with a book in some seasons over others, rainy days instead of sunny, etc? How many books do you read in an average month or year?

A slump is the kind of thing that tends to creep up on me. Often I hardly notice it until I’m looking for a bookmark and can’t find one, and I know that I’ve got at least five bookmarks, and then I start to realize that half the stack of “to-read” books on my nightstand has become “currently reading” without my being aware of it. 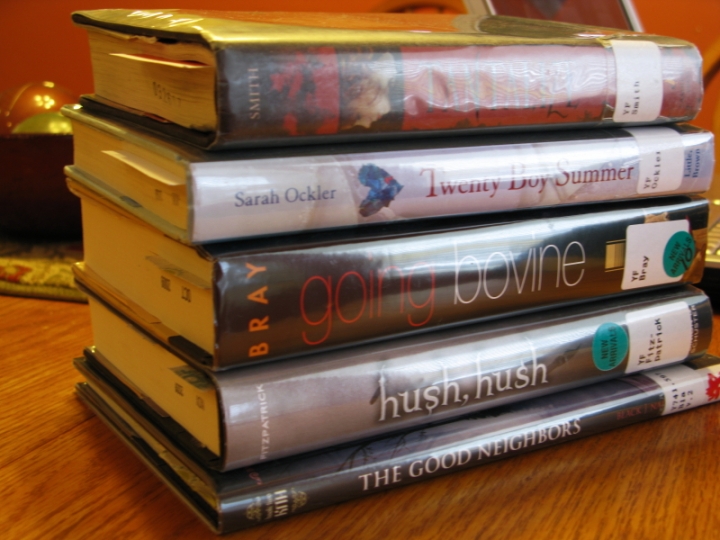 I have to hurry and say that there’s nothing wrong with any of these books. It’s like when you date a guy and there’s nothing not to like, but for some reason the spark just isn’t there for you. Some other girl would probably eat him up, but you’re like, “Yeah, we have a really fun time when we’re together, I just don’t think about him much when he’s not around, and that’s kind of a sign, you know?”

So I’m dating five books at once, at various stages of the relationship.

The worst sign for me, though, is that I’m thinking about other books — past relationships. I know, I know! It’s bad enough that I’m cheating on five of them at once.

But still. I hate slumps. I love to be in love with a book. I love to have that feeling of anticipation where I can’t wait to get back to it again. I love to see my bookmark sticking out from the middle of the book, not the first few pages — like a relationship that’s been going solid for a while rather than still in the beginning stages.

For me a reading slump is a lack of falling in love. It might be just a mood or life circumstance or whatever getting in the way. It might be that the next time I pick up one of these I’ll suddenly fall head over heels and have to stay up all night finishing that one, and then *snap* the slump will be cured. Or it might be that I need to go back to an old favorite first, and pick up that spark with an old fling, just to recover the feeling. Slumps are tough to predict like that.

Anybody else have this trouble? Any slumps or love affairs to report? What books have you absolutely gone over the moon for this year?