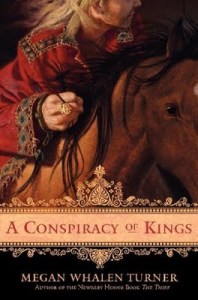 This week I’ve already been asked more than once, “Have you finished Conspiracy of Kings yet? How was it?”

My sister called when I was still in the middle of it. “Do you like it so far?”

“Yeah! I mean, it took me longer than I expected to get into it, but —”

“Well, at first it wasn’t holding my attention, maybe because it was in first person. I kept having to reread paragraphs, not sure I understood or cared what the narrator was telling me, until about page ten.”

She let out the breath she’d been holding. “Page ten? That’s it? I thought you meant worse than that.”

I laughed at myself. “You’re right. I guess I was just expecting to be hooked from the first line.”

Anybody else ever have that trouble? Where you’re so sure that you’re going to love a book that maybe at first it disappoints you?

It’s funny because this wasn’t a disappointing book at all. The story was fantastic, never went where I expected it to, and ended perfectly. All my favorite characters were there, and I met new ones that I already love so much I really hope we see more of them in the last two books (like Sophos’s sisters Ina and Eurydice — adore them). But something kept me from becoming fully absorbed in the story, and I think it was myself.

Sometimes it sucks to be both a writer and a reader, because the writer in me can sometimes ruin a reading experience. Often it’s because I don’t agree with something about the writing style of the book, but this time it was because I was distracted wondering about the decisions Megan Whalen Turner had made as an author.

For example, when the book made the first POV switch, from third-person omniscience in the prologue to first-person narration in the next section, it threw me off wondering why she would change and limit us to Sophos’s head.

I let myself get similarly distracted at a billion points along the way, wondering why she was telling us certain things and why she was taking us in certain directions, instead of just letting go and enjoying the story. It was sort of maddening not to be able to turn off my internal writer, even though in this case I wasn’t picking the writing apart because I didn’t like it — I was picking it apart trying to learn from a master storyteller.

Still, I did manage to appreciate a few great (non-spoilery) quotes along the way the first time through. Here are two for the reading pleasure of anyone still waiting to read this for themselves:

Sounis had been thinking of Ambiades. “He would have been a better man under different circumstances.”

Gen looked at him. “True enough,” he said. “But does a good man let his circumstances determine his character?”

Eddis: “He [Eugenides] proved me wrong. Either because he can see what we can’t or just because he demands the world conform to his own desires. I am never sure which it is that he does.”

I’ve already started reading it a second time. Now that I know where the plot goes, maybe I can relax a little and just enjoy it as a story instead of a tutorial.

Anybody else? What can sabotage a great read for you?

2 thoughts on “When High Expectations Sabotage a Good Read”