In prep for the start of our 48-hour retreat tonight, yesterday I went into massive planning/ research mode, wanting to make sure I’d have plenty of ideas in my brain all ready to grow into actual scenes. My biggest fear for this campout is that I’ll get writer’s block and the whole time will go to waste!

But already the planning/ research is paying off. This morning I woke up with scenes practically jumping out of my head. Luckily I keep a pad of paper by my bed and I quickly wrote down the ideas in all their fantastic detail so that I’m ready to start drafting those new scenes the moment I open my laptop at the condo tonight.

And can I just tell you how great those moments are? Usually writing is such a S-L-O-W process for me. I rarely have scenes come to me so easily, let alone three or more at once!

And it’s made me think of my vines.

Last summer, I looked at every vine at the nursery when deciding what to have growing up our pergola. Many vines get super thick and end up sort of overwhelming the trellises, so I decided on the delicate clematis vines. I had four trellises, needed four vines, and the nursery only had four large (5′) clematis left (the others were only 18″ high — that would have taken forever to get up the 10′ high pergola): a Nelly Moser, a Sweet Autumn, and two dark purple (one Jackman Superba and one Etoile Violette, but I have no clue which is which).

It’s so hard to know a plant’s behavior until you’ve observed it all year round (sort of like people tell you to be sure and date someone through all four seasons before you commit to marriage), so I’ve been fascinated to see how the clematis have started the process of coming back to life this spring.

Not that I didn’t do my research. I learned that Nelly Mosers flower on old growth, like lilacs, while the others flower on new growth, like butterfly bushes. That meant that I left the dead-looking Nelly Moser vines alone while chopping the others down to about four feet high (I’m even more brutal with the butterfly bushes: those I chop down to 8″ — and as if saying, “I’ll show her,” they grow taller and fuller every year because of it).

Anyhow, here’s what’s happening now. The Nelly Moser turns out to be a modest, cautious vine. It poked out just a sprinkling of buds all over, except toward the bottom, where it left woody legs. Each little bud came out at the same time as the other vines, but the Nelly Moser vines have only grown an average of 4″ each. 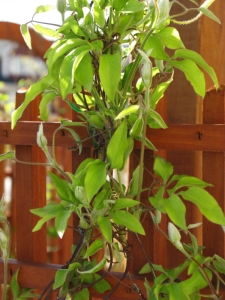 The Sweet Autumn, on the other hand, prefers to start from the bottom, apparently. I left a few of its limbs long (about 8′ high) just to see how it would work out, but the Sweet Autumn apparently isn’t into last season’s remains at all. It only cares about new growth, all in one massively tangled clump, averaging 20″ long so far. 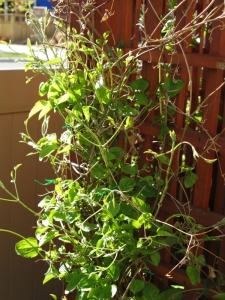 The purples have been the sprinting champs so far. Buds appeared at every crook from the bottom to the top, they’ve grown straight up in a very orderly, efficient fashion, and they’ve averaged 40″ of new growth (again — all the vines got their buds at the same time). The down side has been that with all the frosts and snow we’ve had, the purples have turned out to be the most fragile. About a fourth of their new stems have withered at the top because of the cold.

So, after way more information on clematis than you wanted, which kind are you? This morning felt like a purple day, ideas just climbing so fast. Most days feel like Nelly Moser days: painfully slow. Other days my story ideas feel as tangled as the Sweet Autumn.

But the bright side of having different vines is that they all flower at different times. Nelly Mosers get HUGE pink flowers in late spring, the purples will bloom through the summer, and the Sweet Autumn fits its name. 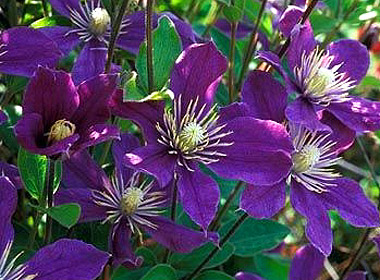 Stories all bloom at different times and in different ways. I’m just hoping, HOPING that this will be a purple weekend, but without too much frost damage. 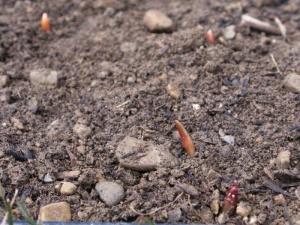 February has Valentine’s Day and it has my birthday, so I should appreciate it more than I do. And it only has 28 days, so I should be less impatient about them passing.

But almost daily now I go out and check on the progress of my tulips just for reassurance that March is around the corner. You have to squat down (and squat is not the loveliest of words) to even tell that they’re coming up at all. Sometimes I brush my hand over the dirt to see if I can uncover a few more.

I get impatient about seeing things grow. Like the dead vines outside that feel like they’ve been dead forever. I’m anxious to see them climbing up the pergola in all their green, leafy glory again. 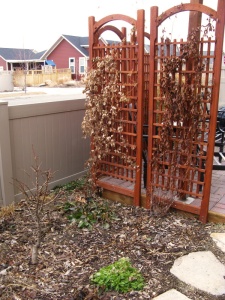 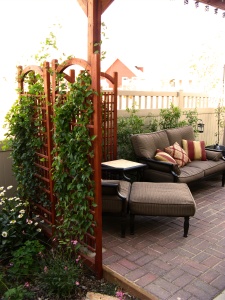 (Winter vs summer: I think everybody’d agree on which we like better.)

It’s the same with stories. On my friend Chersti’s blog a few days ago she asked about writing process, and I remembered how impatient I feel at the beginning of a novel to just start drafting. I want to see that word count grow!

It’s a huge flaw, I think, since a little more planning in the beginning would probably save me on the number of drafts later on, but it’s like I can’t help it. I have to write scenes, not just outline, because it’s in those scenes, like the tulip tips poking out or the buds on the trees, that I find the potential for the whole novel. I start to understand my characters better by seeing them in scene than by writing bios about them, the same way I understand my plants better after seeing them go through all four seasons than I do just reading the info on their tags.

This year I’m hoping to see my WIP come into full bloom — to a final, polished draft. It’s getting so close, and yet I’m still feeling impatient. Every draft I’m still watching for the signs that tell me we’re almost there. Draft three is due by the end of February, when I’m exchanging again with other writers as we did in September, and so that’s just one more reason I’m anxious for February to be over: because then I’ll have a new draft finished and be that much closer to spring!

Anybody else have patience issues, with seasons or writing or what not? How do you cope? What are you looking forward to most about spring?