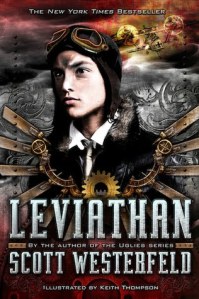 You know what’s impressive? Weaving exposition into a novel so subtly that a reader gets to have wonderful moments of “Aha! I get it! That’s so cool!”

Reading Scott Westerfeld’s Leviathan for the first time has been like that all the way through, and it’s made the whole reading experience so much fun.

Take the first page, for example:

The Austrian horses glinted in the moonlight, their riders standing tall in the saddle, swords raised. Behind them two ranks of diesel-powered walking machines stood ready to fire, cannon aimed over the heads of the cavalry. A zeppelin scouted no-man’s land at the center of the battlefield, its metal skin sparkling.

The French and British infantry crouched behind their fortifications — a letter opener, an ink jar, and a line of fountain pens — knowing they stood no chance against the might of the Austro-Hungarian Empire. But a row of Darwinist monsters loomed behind them, ready to devour any who dared retreat.

The attack had almost begun when Prince Aleksander thought he heard someone outside his door . . .

He took a guilty step toward his bed — then froze in place, listening hard. Trees stirred in a soft breeze outside, but otherwise the night was silent. Mother and Father were in Sarajevo, after all. The servants wouldn’t dare disturb his sleep.

Alek turned back to his desk and began to move the cavalry forward, grinning as the battle neared its climax.

I don’t know if every reader’s experience is like mine, but I went in not at all sure what this book was about and got to put the pieces together one step at a time. Walking machines? I pictured something similar to those huge Star Wars two-legged shooters, and the mention of a zeppelin helped me picture the time period. The letter opener, ink jar and fountain pens confused me, but in a good way, like I knew this scene wasn’t what it appeared to be and I got to anticipate the “reveal.” And then Darwinist monsters? No idea, but I loved the sound of them, whatever they were, and I was excited to find out.

Just a few short paragraphs later, Westerfeld reveals the writing supplies by saying “Alek turned back to his desk.” He doesn’t stop and say, “The reason they were crouched behind writing supplies is that these were toy armies.” He simply shows us what’s happening and let’s us figure out what it means.

We get to see the walking machine in the second chapter, but “Darwinist monsters” doesn’t become clear for several more chapters, and even then he shows us what that means gradually, first by introducing us to “tigeresques” that are “fabricated . . . half-wolf tigers” and then showing us the Darwinist version of a hot-air balloon: a giant jellyfish-like thing that rises with enough hydrogen to carry one scout into the air.

I remember the moment when I caught on that the British and French are “Darwinists” with beasts as weapons and the Austrians and Germans are the “Clankers” with zeppelins and walking machines. I really did say out loud, “That’s so cool.”

The reason I think it’s cool is because it amounts to the author dropping clues and letting the reader solve them. It lets the reader experience the action without having to pause for exposition; it gets the reader in on the game as an active participant. On the other hand, when an author stops to give exposition, even in the case of a sequel reminding us what happened in the previous book, it tends to throw the reader out of the action and create the feeling of being lectured to.

It works the same way with teaching. If you can use an “indirect” approach that allows the students to figure concepts out for themselves, it allows students to participate as opposed to inflicting them with the sleep-inducing effects of direct lecture.

But being aware of that doesn’t make doing it easy. I struggle to come up with indirect lesson plans as much as I struggle with weaving exposition into the action of my manuscripts. Sometimes I get it right, but often I bomb it.

The whole time I’ve been reading Leviathan I’ve been thinking to myself, “Holy cow. I’ve got to learn how to write this well.”

It’s a humbling feeling, but also fantastic. I’m so excited now to jump back into “world building” with my novel and come up with more fun setting details and cultural terminology and elements of the magic system that a reader might be intrigued by, and then figure out how to weave those things into the novel like dropping clues. And I think I’ll keep Leviathan on hand as my textbook for how to do it well.

What have you learned lately from fantastic novels or fantastic examples of whatever your craft is?

5 thoughts on “Darwinists and Clankers — No Need to Explain”